In Apache RocketMQ, messages can be generated before or after they are subscribed to by consumers. So how does a consumer know where to start consuming messages, and how are consumed messages marked? In order to overcome this challenge, Apache RocketMQ has developed the consumer progress management mechanism.

In Apache RocketMQ, messages are queued in topics in the order that they arrive, and are assigned a unique Long-type coordinate. This is also known as the offset of the message. For more information about the individual definitions of these concepts, see Topic and Message queue.

Theoretically speaking, a message queue can store an indefinite number of messages. Therefore, the value range of offset is from 0 to Long.MAX_VALUE. You can locate any message based on its topic, queue, and offset. The following figure shows the relationship between these three concepts. 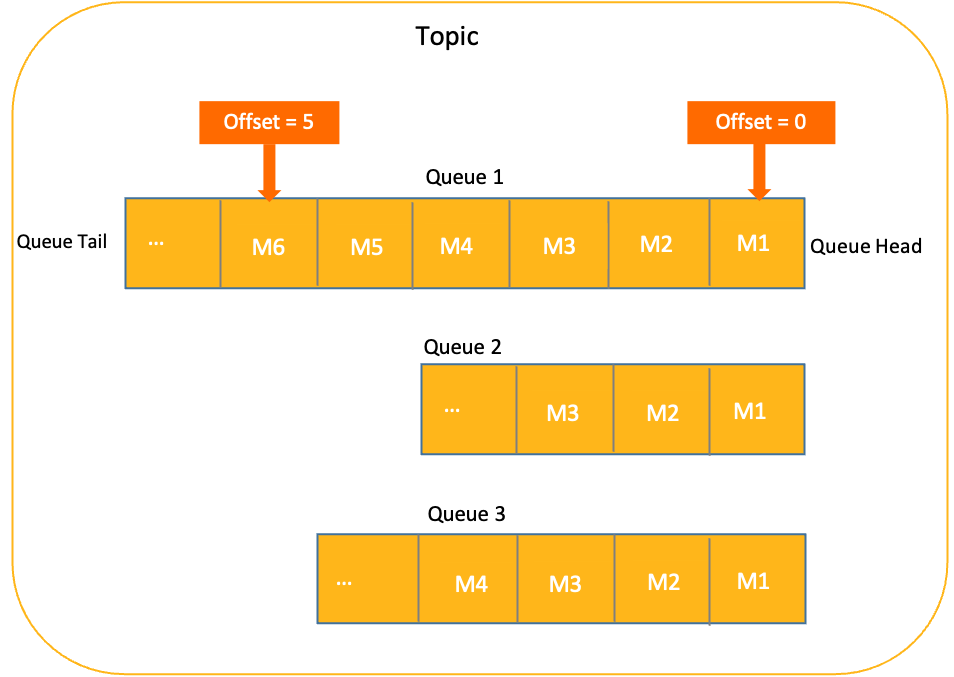 In Apache RocketMQ, the offset of the earliest message in a queue is called the minimum offset (MinOffset), and the offset of the latest message is called the maximum offset (MaxOffset). Although a message queue can theoretically hold an indefinite number of messages, the physical machines on which they are stored have limited space. Therefore, Apache RocketMQ dynamically deletes the earliest message from a queue, and the MinOffset and MaxOffset values of the queue increase constantly.

Apache RocketMQ follows the publish-subscribe pattern. Multiple consumer groups can subscribe to the same queue. In scenarios such as this, when a consumer deletes a message after consuming it, the other consumers are unable to consume it.

Consumer offsets are saved to and restored from Apache RocketMQ servers, and are not related to any specific consumer. Therefore, Apache RocketMQ can restore consumer progress across different consumers.

The following figure shows the relationships between the minimum offset, maximum offset, and a consumer offset in a message queue.

Apache RocketMQ uses the maximum offset of a message queue when a consumer obtains messages from the queue for the first time as the initial consumer offset. In other words, the consumer starts consuming from the latest message in the queue.

The consumer offset reset feature of Apache RocketMQ allows you to:

Servers have different definitions for the initial consumer offset in different versions of Apache RocketMQ.

Therefore, if you upgrade from an earlier version, you must pay attention to the initial consumer offset when you launch your client.

Resetting the consumer offset incurs additional burden on the system and may affect message reads and writes. Therefore, we recommend that you evaluate the risks and benefits before you perform this operation.