A producer in Apache RocketMQ is a functional messaging entity that creates messages and sends them to the server.

A producer is typically integrated on the business system and serves to encapsulate data as messages in Apache RocketMQ and send the messages to the server. For more information about messages, see Messages.

The following message delivery elements are defined on the producer side:

Producers and topics have an n-to-n relationship. A producer can send messages to multiple topics, and a topic can receive messages from multiple producers. This many-to-many relationship facilitates performance scaling and disaster recovery. 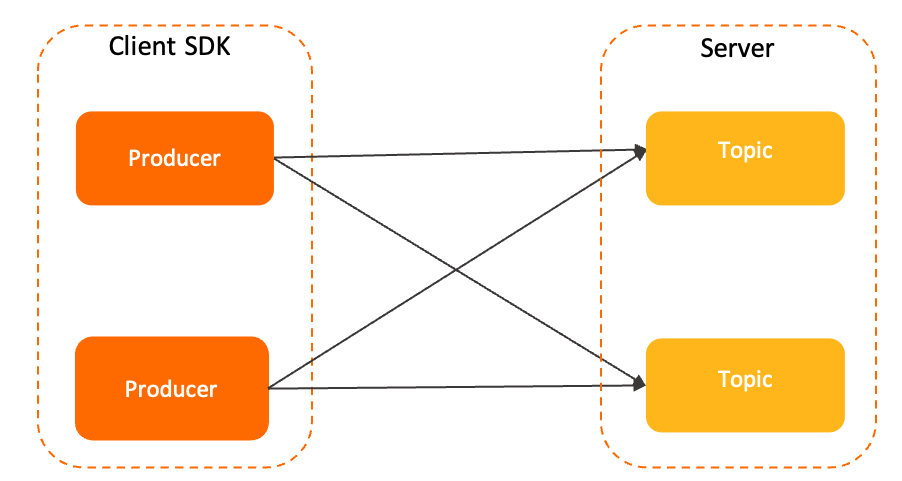 The following figure shows the role of producers in the messaging model of Apache RocketMQ.

We recommend that you limit the number of producers on individual processes.

In Apache RocketMQ, producers and topics provide a many-to-many form of communication. A single producer can send messages to multiple topics. We recommend that you create and initialize the minimum number of producers that your business scenarios require, and reuse as many producers as you can. For example, in a scenario that requires message delivery to multiple topics, you do not need to create a producer for each topic.

We recommend that you do not create and destroy producers on a regular basis.

The producers of Apache RocketMQ are underlying resources that can be reused, like the connection pool of a database. You do not need to create producers each time you send messages or destroy the producers after you send messages. If you regularly create and destroy producers, a large number of short connection requests are generated on the broker. This imposes a high level of load on your system.