If a message fails to be consumed, Apache RocketMQ redelivers the message based on a consumption retry policy. This helps remove some faults. This topic describes the working mechanism, version compatibility, and usage notes of the consumption retry feature.

The consumption retry feature of Apache RocketMQ ensures consumption integrity that may be affected by the failure of a business processing logic. This feature is a protective measure against business logic failures. It cannot be used to control the business process.

The feature is suitable for use in the following scenarios:

Do not use the feature in the following scenarios:

A common issue of message middleware in asynchronous decoupling is how to ensure the integrity of the entire call link if the downstream service fails to process messages. As a financial-grade reliable message middleware service, Apache RocketMQ uses a well-designed message acknowledgement and retry mechanism to ensure that every message is processed according to business expectations.

Message retry policies use different retry mechanisms and configuration methods based on the consumer type. The following table describes the differences between the policies.

When a push consumer consumes a message, the message can be in one of the following states: 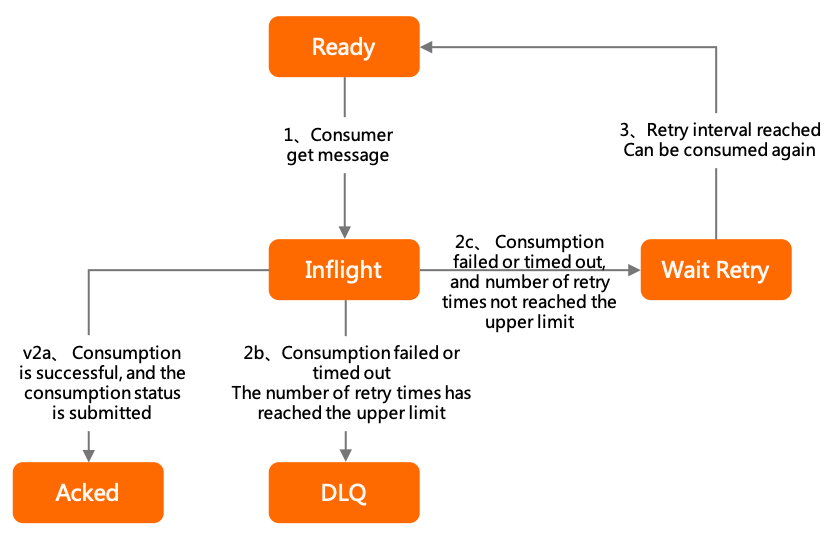 When a message is retried, its state changes from Ready to Inflight and then to WaitingRetry. The interval between two consumptions is the sum of the actual time spent on consumption and the retry interval. The maximum consumption interval is specified by a system parameter on the broker and cannot be exceeded.

The maximum number of retries for a push consumer is specified in the metadata when the consumer group is created. For more information, see Consumer groups.

For example, if the maximum number of retries is three, the message can be delivered four times: one original attempt and three retries.

If the number of retries exceeds 16, the interval of each subsequent retry is 2 hours.

For push consumers, a message retry is triggered only by the status code of consumption failure. Unexpected exceptions are also captured by the SDK.

When a simple consumer consumes a message, the message can be in one of the following states: 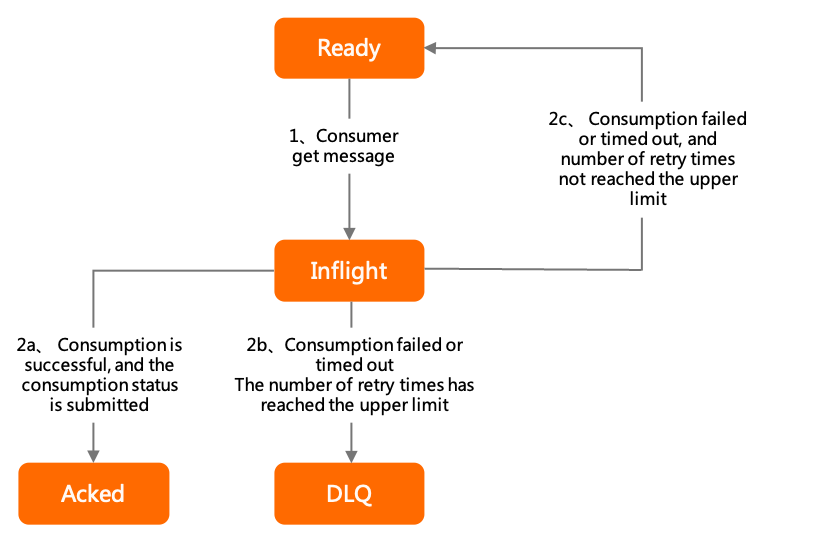 The retry interval is fixed and pre-allocated. It is configured in the InvisibleDuration parameter by the consumer when the consumer calls the API. The parameter specifies the maximum processing duration of the message. When a message is retried, the value of the parameter is reused. You do not need to configure the interval for the subsequent retries.

Because the InvisibleDuration value is pre-allocated, it may not meet your business requirements. You can change it in the code that is used to call the API.

For example, if you set the InvisibleDuration value to 20 ms and a message cannot be processed within the duration, you can change the value to a larger value to avoid triggering the retry mechanism.

Before you can change the InvisibleDuration value, the following conditions must be met:

As shown in the following figure, the change takes effect immediately, that is, the InvisibleDuration value is recalculated from the point in time when the API is called.

The maximum number of retries for a simple consumer is specified in the metadata when the consumer group is created. For more information, see Consumer groups.

Simple consumers need only to wait for a message to be retried.

Set a proper number of retries to avoid infinite retries

Although Apache RocketMQ supports custom numbers of consumption retries, we recommend that you set a small number of retries and a long retry interval to reduce the burden on the system. Avoid a large number of retries or infinite retries.